I know the tradition is for WIP (Work In Progress) Fridays, but I've actually finished a couple of things this week. First is the baby cardigan: 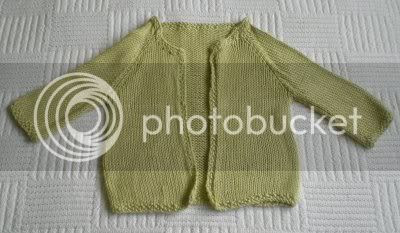 The pattern is Daisy by Stephanie Pearl-McPhee. I didn't do the hood and I've left it plain. It still needs some buttons but I'll get those at some point. I used Sirdar Baby Bamboo in Willow, about 2 1/2 balls.

I absolutely loved working with the bamboo (well, 80% bamboo, 20% wool). It was so soft (I kept putting the knitting down to stroke it) and has a lovely sheen to it. It drapes nicely too and the stitches came out so evenly. I have another 2 1/2 balls left over (one ball in off-white, the others are the green) and I'm planning to make a hat, and probably some other bits as well.

The other thing I've finished this week was a winter hat I was making from Petulant Feminine. No photo because it turned out too big and I don't like it much. Not sure whether to frog it and try again, or just leave it for now. I'll probably end up leaving it because it's getting a bit late in the year for winter hats anyway.

I should be careful saying things like that, it'll snow tomorrow now. Eh.

Oh, and my actual work in progress is now the Lucky Clover Wrap from Stitch'n'Bitch Nation. I only did two rows last night, though, because after I'd cast on 119 stitches with 4-ply cotton on 2.5mm needles, it's then 1x1 rib, which I already know I hate. But I hate it MORE in 4-ply cotton on 2.5mm needles. Only two more rows to go though before I can start the clover pattern instead, on 3mm needles!
Posted by Anna at 10:01 2 comments:

I love that phrase. Odds and sods. Next time I have a website that has a miscellaneous section, I'm going to call it that.

I've been promising photos of the crochet baby blanket for a long time and today I actually managed to take some, outside in the sunshine no less. This first one though is of it blocking in the spare room (don't we have lovely beach towels?). Click on the picture to see it bigger. 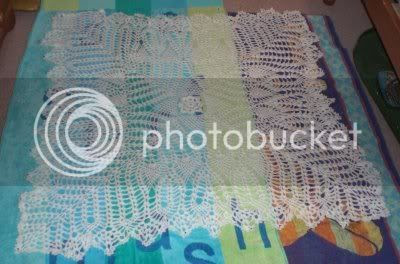 And here it is outside, enjoying some February sun: 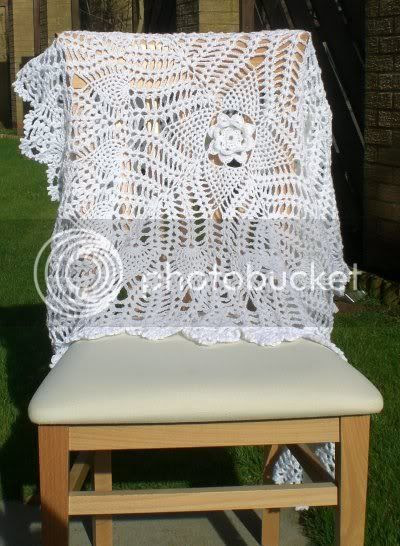 Although it's nearly March, and that makes me happy. I am not a winter person, not even a little bit, even though I was born in December. I need to be warm and sunshine-y.

On Friday I made some raspberry buns. 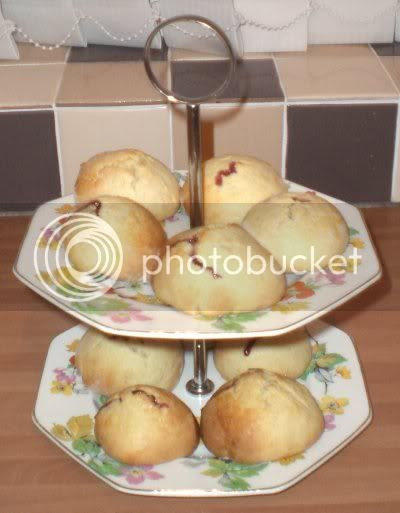 They are a bit like scones, but slightly sweeter, and with the jam already inside (efficient!). The recipe is from the mother-in-law, and if anyone wants it, I'll post it (I'm sure she won't mind). Hers don't usually go as volcanic as mine though. But never mind! They still tasted fine, and there are currently none left, so obviously I need to make some more.

I was at the library today and they had the new Stitch'n'Bitch book, which is patterns for men. I had a flick through, but I didn't bother getting it out, because I know his nibs wouldn't wear anything I made for him. Actually, that's not quite true, because I did knit him a hat years ago and he did wear that for a while, but he has a pirate hat now (a wool hat with a skull and crossbones on, not an actual pirate hat).

Today I've been playing with various bits of fabric and things, trying out some new stuff to make, maybe for the shop, maybe just for myself. But this post is getting long enough as it is, so I'll postpone. 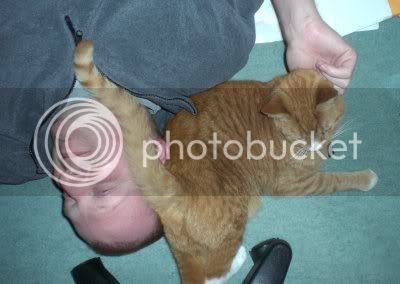 This was the view of the floor by my computer the other day. Mark was lying on the floor (he does that) and then the cat came and sat on his head. Sometimes I worry about those two.

Proper post coming later.
Posted by Anna at 10:29 No comments:

A quick update photo of my biggest project: 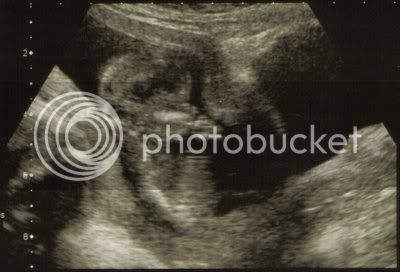 We had a second dating scan yesterday (long story) and got a much better picture this time! It was really fantastic being able to see the baby properly. We won't get to see it again until the 21st of April (and after that, the end of August - slightly scary thought).
Posted by Anna at 16:33 1 comment:

No really, I'm going to update this blog more often than the other one

Yes, I'm still alive. I've just been doing some temping and that makes me tired and disinclined to do anything in the evenings. But I have some stuff I wanted to talk about so here I am.

Firstly, I finished the crochet blanket! I am so pleased with it, it's turned out beautifully. No pictures yet because I've just given it a wash and it's drying. I've found a box and bought some tissue paper so once it's dry I'll take some photos and then package it up. The baba it's for won't be here until April so it's got a little while to wait.

My next project is my yellow wrap cardigan, but I haven't started it yet because the needles I have in the appropriate size are old vintage ones with quite blunt points, and the pattern is quite lacy so I need pointier ones. We're going into MK tomorrow so I should be able to drag Mark through the doors of John Lewis for a few seconds so that I can buy some better ones. Then I can start.

Mark requested a Mamas and Papas catalogue and it arrived yesterday. There are some lovely things in it but they're so expensive! I'm choosing to view it as inspiration for things that I can make or modify myself. Here are some of my favourite things from that viewpoint: 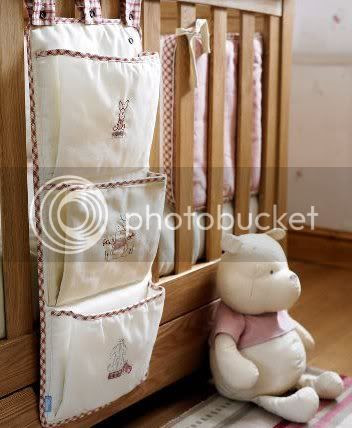 Cot tidy with pockets. I think I'd make it a bit more colourful, though, with more applique/embroidery on the pockets, and maybe a quilted back. 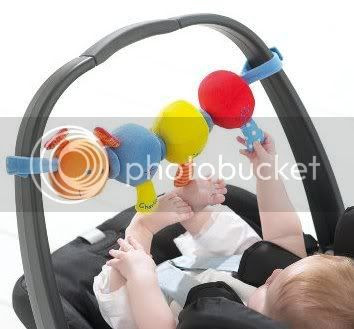 Pram toy - maybe a caterpillar, or maybe a train! Lots of things you could do. 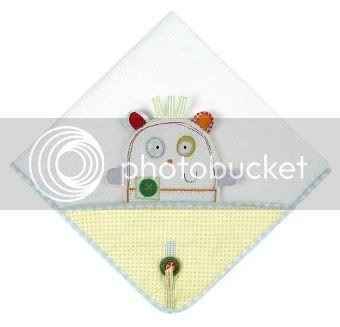 Hooded towels with applique, and matching wash mitts. If you had two matching towels, and cut the corner off one to sew onto the other to make the hood, you'd have plenty left to make the mitten. Not sure if I'd make it look that manic, though. 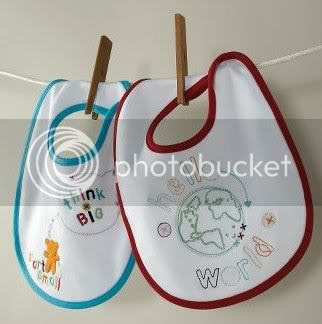 Embroidered/appliqued bibs. I'm most amused by the 'Hello World' one, because it's traditional that when learning a new programming language, the first programme you write is one that prints 'Hello World' to the screen.

I know I probably won't make half of these things, but they're all so lovely in my head! I don't do a huge amount of sewing but I'm inspired to now. I have a sewing machine so it wouldn't be too hard. Hmm.
Posted by Anna at 14:25 No comments:

After some trials and tribulations that I won't go into here, I finally have all my baby bamboo wool. It's 80% bamboo and 20% wool, and it's lovely. 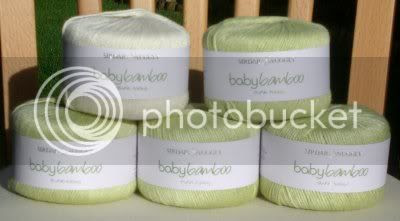 No I don't know how they make bamboo into knitting wool, but it's ever so soft, and machine-washable! It's going to become a tiny cardigan and hopefully also a hat, but I haven't chosen a specific pattern yet.

And I can't get started on that before I finish my crochet blanket for Chris and Nicola. That is very nearly done and I hope I can get it done by the end of the week. A round and a half to go, which I think is about 3 hours work, although the last round looks quite fiddly so it might take longer.

Also, I want to make a hat (maybe something like this one) for this winter, so I should do that soon. And I want my wrap cardigan for this spring and that isn't started yet either, and apparently that pattern takes a looong time. So I should probably put off the baby knitting, considering it won't be needed for months.

But the bamboo is so lovely!
Posted by Anna at 11:15 No comments: