Laura's paper crown finally fell to pieces, so I said I would make her one that would last a bit longer. I asked her what colour she wanted and she said pink. So this is what we ended up with. 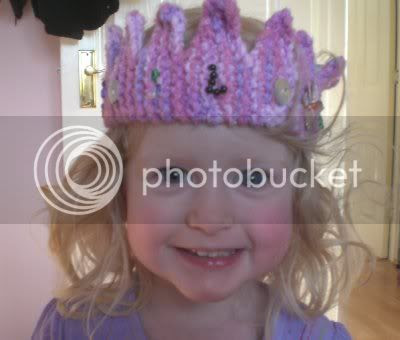 I used some Patons Symphony that I had hanging around the place. It's a soft chunky yarn in variegated pinks and purples. I invented the pattern. And after it was knitted, I blinged it up a bit with some beads, sequins, buttons etc that I had. Laura thinks it's great so I'm very pleased with that day's work!

I used chunky wool and 5mm needles, but anything would work really. Using a needle a bit smaller than recommended for the yarn is probably a good idea because that makes the points stand up a bit better.

kfb = knit into front and back of stitch

Repeat rows 1-8 until the crown is the same length as your child's head is round. Knit two rows plain. Cast off and sew ends together. Decorate with whatever shiny things you can find.
Posted by Anna at 21:51 2 comments: 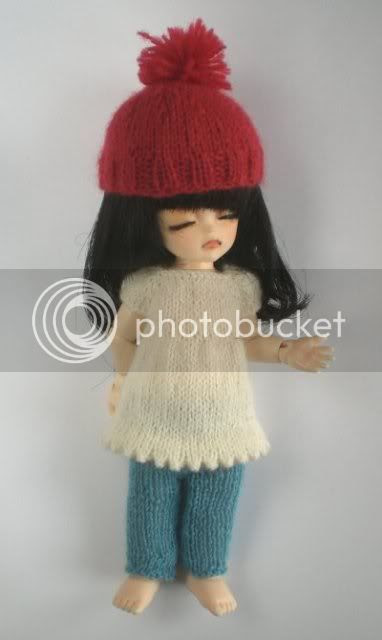 Bit of a random assortment! The book is nearly finished, just need to work out one or two more patterns and then work on getting some good photos.
Posted by Anna at 19:28 1 comment:

So with that in mind, here are a few lovely summery items that caught my eye on Folksy.

Toddlers, glue and a special offer!

Laura and I have been crafting: 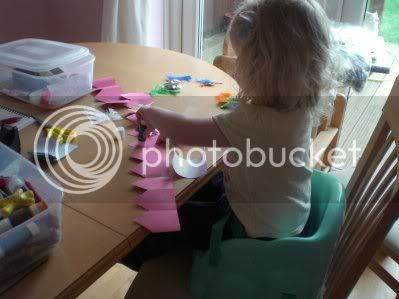 The girls were invited to a birthday party last week, a Fairytale Party, so they needed princess crowns to wear with their party dresses. I made Emily's and Laura had lots of fun decorating hers. I love doing things like this with her. At the moment we have a cardboard box upside-down in the living room, being a house for her Timmy the sheep. We have been colouring it, and drawing on windows and flowers, and sticking on bits of tissue paper. And she was wearing the crown, although it is now nearly a week old and she's napped in it twice and it's a bit worse for wear.

And now for the special offer! To celebrate spring, the next five purchases from my craft supplies shop, Wind The Bobbin Up, will each get a free gift in with their order. I'll try and find something that goes with what you ordered. So now would be the perfect time to take a look at all the buttons and ribbons and other pretty things, for all your bright and cheerful spring crafting.

(those flowers were featured on the Folksy blog! I was so excited)
Posted by Anna at 14:44 No comments:

Some months it's a bit of a relief to turn over the calendar. March was, well. Not good. The husband was made redundant at the beginning of the month, then the dishwasher broke again and finally the cat had to have emergency surgery and a stay in kitty hospital (he's home again now and fine as far as we can tell).

But April is a new month, and spring, and I've finally managed to get the girls to co-ordinate their afternoon naps. And I finished my yellow cardigan (but haven't managed to sew on the buttons or take a photograph).

And I have a video of a cute baby.