Laura's jumpers are getting a bit tight so I turned to Ravelry to find a suitable pattern for a new one. In the end I chose the Lacy Sweater by Zoë Mellor - I love the flower motif on the front! So far I've finished the back and started on the edging for the front. It's a Rowan pattern and knit traditionally in pieces but that's fine by me, I don't mind a bit of seaming. 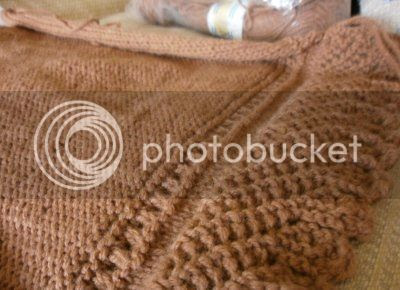 The yarn is some that I got from Freecycle a couple of years ago. It's acrylic but feels quite soft and is nice to knit with. Laura loves the pattern so hopefully she will like the finished jumper too! 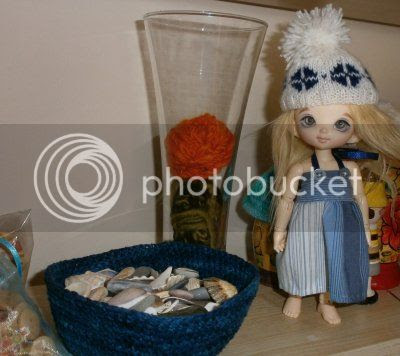 A rainy Sunday afternoon is just the time to make chocolate fairy cakes with your little helper: 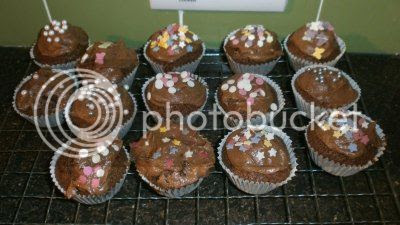 We've accumulated quite a few pots of different kinds of sprinkles and Laura always insists on using them all.

Also to show off on this rainy Monday morning is the bear that I knitted for the Simply Knitting Refuge campaign (just like Goodwood). She's coming with us to the Knitting & Stitching Show to be handed over. 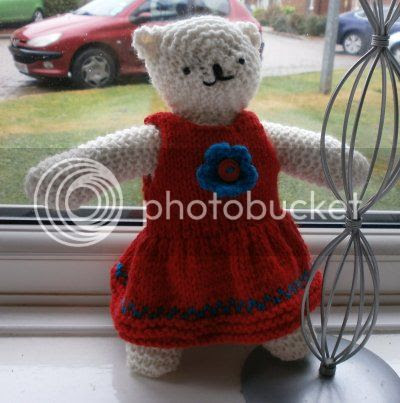 I'm now making a jumper for Laura, from a Rowan pattern that is free on their website. Finished the back so far, and started on the front. I will try and remember to take some photos and I will share them next time. And also of Laura's new bobble hat, her winter hat from last year having got a bit small. Children that keep growing certainly keep you knitting.

I'm linking up this week with Handmade Monday for the first time, over at Handmade Harbour. Lots of lovely blogs are linked up so why not join in!

So I finally finished the blanket I was making for the Simply Knitting Knit for Refuge campaign! 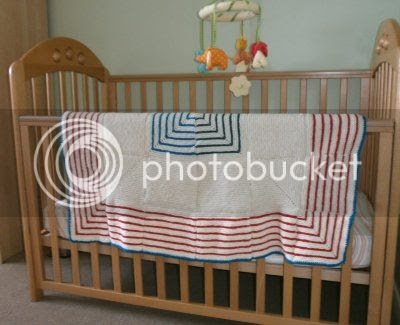 It's made of 48 6"/15cm garter stitch squares, with a plain crochet border. It's child-sized, and I tried to make a pattern that was suitable for a boy or a girl. I've called it Goodwood because it reminds me of a racecourse. 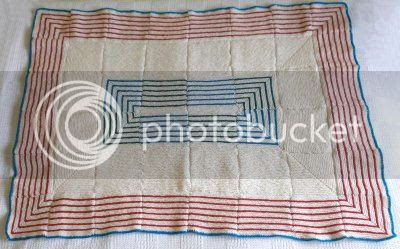 This blanket is going with me to the Knitting & Stitching Show at the Alexandra Palace in October, so I can hand it over at the Simply Knitting stall there. But I thought I'd share the pattern in case anyone else liked it and wanted to make it, either for Refuge or for themselves. 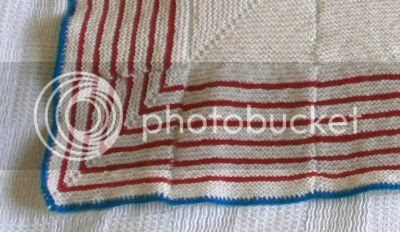 The pattern is available for free on Ravelry, but if you like it, please consider making a donation to Refuge.
Posted by Anna at 13:53 5 comments:

As a knitter and crocheter, spinning is something I've heard a lot about. I've always been kind of interested in it, but I certainly don't have the money or the space for a spinning wheel. Earlier in the year I added a spindle to my birthday/Christmas list for this December, but a few weeks ago I had a bit of 'found money' so I decided to treat myself. 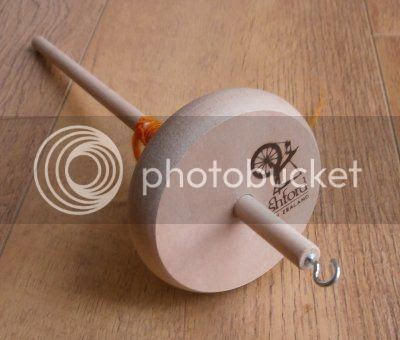 This is (deep breath) an Ashford top-whorl student drop spindle. I bought it on eBay from Forest Fibres. It came in a kit with instructions and five different colours of merino wool roving so I was set to go.

So far I've been getting on with it pretty well. It's frustrating, because I've realised that I had this subconscious idea that because I'm an experienced knitter and crocheter I would be able to spin already, which is of course not how it works! My drafting is very uneven, I keep forgetting which way I was spinning the spindle and my plying is atrocious. If you don't believe me, here's a photo of the worst yarn in the world: 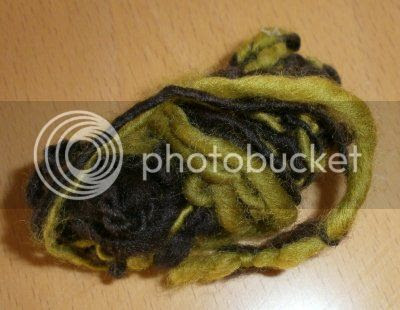 I had some similar in orange and brown too, and it did look a bit better when it was knit up: 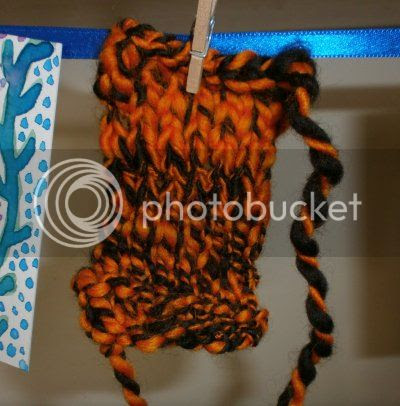 I think I am getting a bit better. I'm sure I just need practice. There is something very calming about it all. And you do feel awfully clever afterwards. Next up is to spin enough of the orange to make a little hat for Felicity.

One of the things that happened over the summer is that Laura turned four. I asked her what kind of birthday cake she wanted, and she said a Mike the Knight cake, so we agreed that a castle was the way to go. And this is what I came up with. 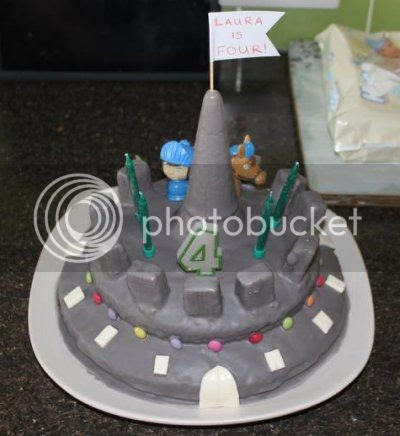 I was really pleased with how this turned out, and it wasn't even that difficult! Here's a picture from just before I iced it so you can see the construction. 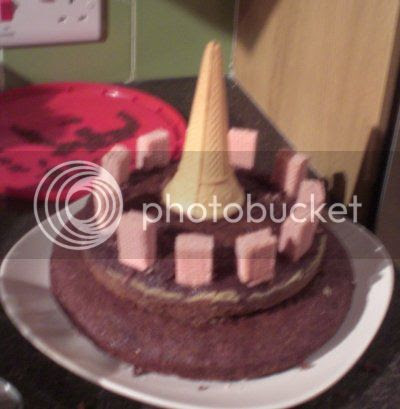 Essentially it's two round cakes, one larger than the other, sandwiched together with some buttercream icing. I cut up some pink wafer biscuits and stuck them round the edge of the top cake with more icing (I found they stayed in place better when I used a teaspoon to dig out a little hole for them to sit in). Then an ice cream cone, upended, stuck down with more icing.

Then I mixed up a big bowl of grey royal icing and poured it over the top! I used Emily's baby knife as a plastering tool and covered the whole thing. The icing was easy to make, I got a box of royal icing sugar which just needs water added to it until you get the consistency you want. It sets hard and shiny. Once the whole cake was covered in the grey, I added some smarties for decoration, and some chewy sweets cut into the shapes of the windows and the door. The next day when the icing was hard I added the candles, flag and figures. And Laura loved it, so it was everything it needed to be.

Linking this up for the PinAddicts Challenge! You choose one thing that you've pinned and actually do it.

At the beginning of the summer I made a Pinterest board called Summer 2012 Ideas with lots of crafts and games for little ones. It made me feel a lot more confident about getting through the summer without everyone getting bored and fed up. However, we had lots of days out, and new toy infusions in July (Emily's birthday) and August (Laura's birthday), and by the beginning of this week we'd done exactly one thing from my board! So on Monday, with two more days until the start of term, I thought we'd have a go at one more. I chose Cloud Dough, which was pinned from here. Eight cups of flour and one cup of baby oil.

Firstly, I didn't have any baby oil so I used cooking oil. Also, when I was measuring the flour out into the washing-up bowl I thought that 6 cups looked like enough so I used 3/4 of a cup of the oil. Then I mixed, first with a wooden spoon and then with my hands, until it was all mixed in. It was very similar to when you mix flour and butter to make pastry 'breadcrumbs' which makes a lot of sense! I put the bowl out on the patio, along with some wooden spoons, teaspoons, plastic cups and toy diggers, and let the girls have at it. 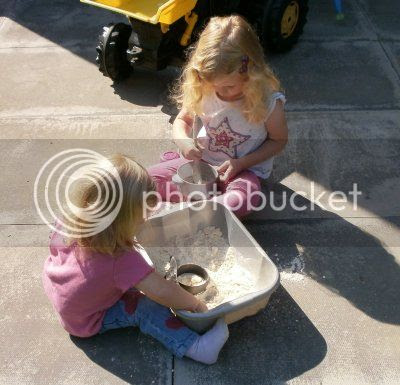 They had great fun! And played for ages. Digging, moulding, scooping, driving it around in little trucks. Some of the toy kitchenware ended up in there so Laura could make cakes. Emily mainly filled up a cup using a spoon, then dumped it out, then did it again. 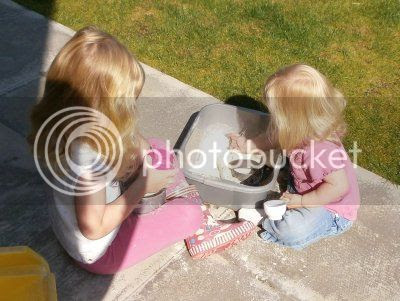 I would very much recommend using this outside, especially with younger children. The flour got spread far and wide, and despite my best efforts made it into the house (little white footprints all over the floor and the rugs). And the bottom of Emily's trousers was a sight to behold. But they had good fun and I'll definitely remember it for other sunny days in the future.

It's a bit surprising to pull up the Blogger page and find out that I totally skipped August! I certainly didn't intend to do that but I have tried to pull away from the computer a bit during the holidays. The husband had some time off work during August so we've been mainly playing at home, with occasional day trips and visits from friends. But now the summer is drawing to a close - Laura starts school full-time on Wednesday (having turned four last Tuesday) - and I want to get back into my blogging and pattern-writing.

I've called this post 'Happy New Year' because, especially with an other half who works in education, September always feels more like the new year to me than January does. Now that Laura's in school I should imagine that feeling will only get stronger. Time to think about plans and goals, and to make new routines.

I've done a fair amount of knitting over the summer, a lot of it for charity. I've made a bear and 90% (so far!) of a blanket for the Simply Knitting Refuge campaign. When the blanket is finished, I plan to share the pattern as a free Ravelry download. I've also been making tiny hats for Felicity the Pukifee and working on glove and shawl patterns to release this autumn. And finally, I've been thinking about an ebook of patterns for gifts to make using sock/4-ply/fingering weight yarn. More details of all of these to come as I catch up with my blogging and settle down into the new year.
Posted by Anna at 14:35 No comments: